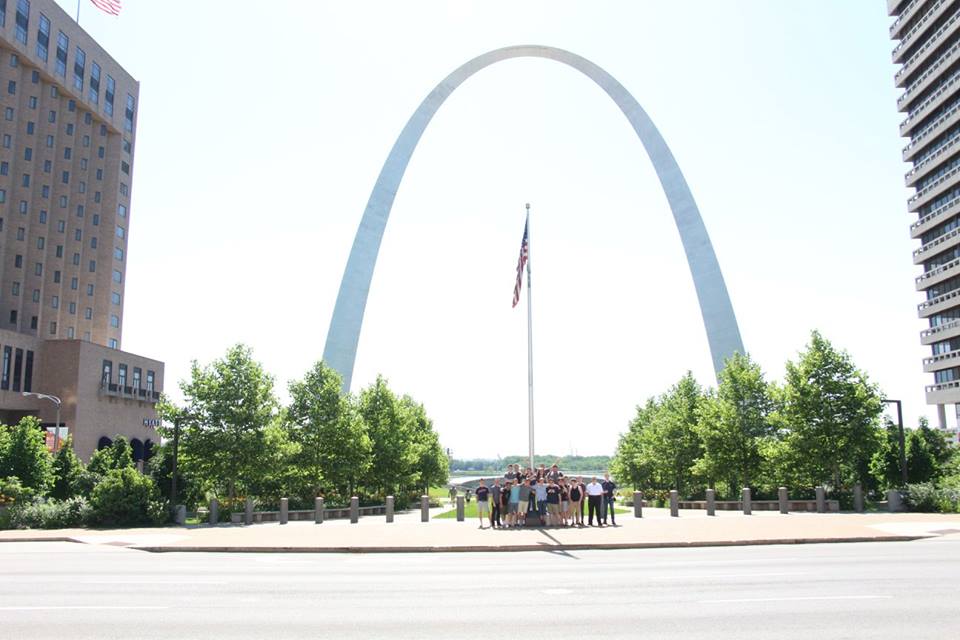 Early this June, Jazz Arts Group had the opportunity to take the Columbus Youth Jazz Orchestra to perform in St. Louis, Missouri. Throughout the trip, the CYJO performed for audiences in St. Louis and Cincinnati. In addition, our students were able to watch the students in Jazz St. Louis’ JazzU program perform and work with world-renown jazz saxophonist and educator, Antonio Hart. This trip was an eye-opening experience and not only allowed the CYJO to showcase their exemplary musicianship, but also learn from their peers learning jazz hundreds of miles away from Columbus, Ohio.

The morning of Saturday, June 2nd, 2018, seventeen members of the CYJO and five JAG staff members boarded a 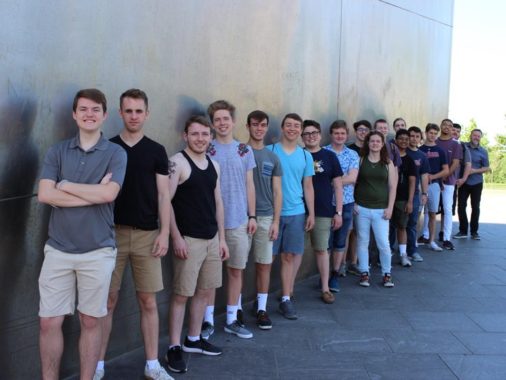 charter bus with instruments and suitcases, ready to explore a new city. By 4:00 PM we could see the arch outside the windows of the bus and felt the students’ excitement around us. After checking into our hotel and getting ready, we headed down to The Ferring Jazz Bistro, home of Jazz St. Louis. Students of the Jazz St. Louis JazzU program performed in combos and our CYJO students were amazed by their skills in improvisation and style. Like our own Columbus Youth Jazz Program, these students rehearse just once per week throughout the school year, traveling from as far away as 4 hours one way to get to rehearsal! As chaperones, our hearts were filled watching our students’ jaws drop when Antonio Hart played with the combos. Overall, the performance was phenomenal and the students left feeling excited to perform in the space the next night.

Sunday morning we left from the hotel straight to the famous Gateway Arch. The weather was absolutely perfect for us. JAG’s Executive Director, Press Southworth, was even daring students to try and find a cloud in the sky. Our group crammed into the tiny pods leading up to the top of the arch and marveled at the view of the entire city. After taking in the view and snapping some selfies, we all traveled back down to the bottom and off to our next destination; lunch at the Hard Rock Cafe.

We left immediately from the Hard Rock Cafe to the City Museum. This museum is a one of a kind architectural marvel that encourages kids and adults alike to explore and question what is around them. The City Museum is the brainchild of Bob Cassilly who said “The City Museum makes you want to know.” The students took immense joy in the opportunity to explore in an area completely new and unlike anything they had seen before. From the ten-story indoor slide to the outdoor “MonstroCity” full of tunnels, slides and bridges, the students were exploring from the moment we arrived until it was time to depart. Our only regret was that we weren’t able to stay longer, we had to get back to The Bistro for sound check with Antonio Hart.

The sound check went great and the performance was even better. The students played their hearts out and took 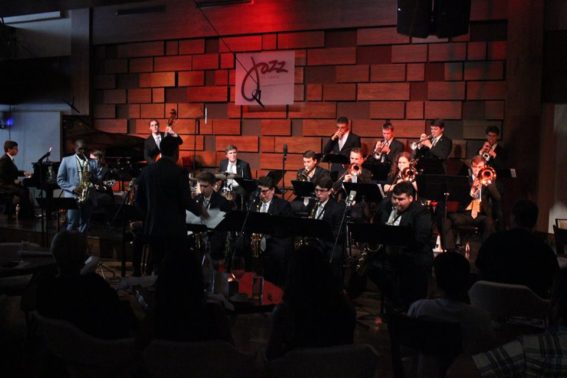 Antonio’s advice in playing like it was their last performance ever. Our pieces were chosen from the following selection; Fantail, Stompin’ at the Savoy, Groove Merchant, Recorda Me, Self-Help is Needed, Things to Come, and La Fiesta. We took the opportunity to broadcast the CYJO performance through Facebook Live so that the friends and families of the students could join us. To date this video has reached over 2,500 people, displaying the incredible talent of young Columbus musicians to the entire world.

Monday morning we loaded the bus to our last stop for a gig in Cincinnati. There was a sense of comradery within the band prior to this trip; however, there is no denying that the band had become nearly inseparable by the time we were heading for home. This was most notable as we stopped to meet up with the parents of trombone player Jay Sandlin. Jay had arranged to leave early from the trip because he was scheduled to be in a hotel in Columbus by 8:00 PM that night. He was reporting for service with the United States Air Force, and we could not be more proud. As the bus pulled into the parking lot, Mark Donavan turned to the band and simply stated, “Ladies and Gentlemen, Jay Sandlin.” Jay then exited the bus to the sound of a roaring applause from his bandmates. A few students even followed after him to give him a quick hug or handshake before he left. This was truly a heartwarming moment that represented the bond that is formed between young musicians as they learn and grow together. 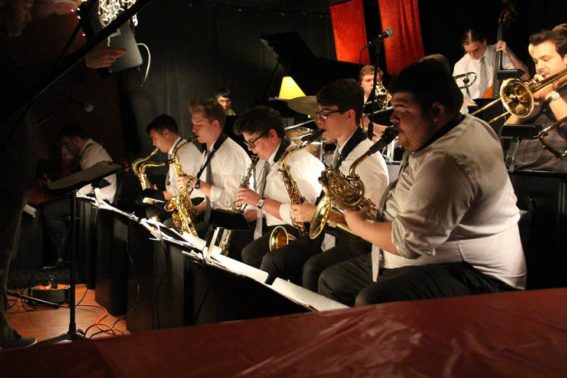 The last stop of the trip was a performance at The Greenwich in Cincinnati, opening for Jon Von Ohlen’s Flying Circus Big Band. The students not only played well, but they appeared to be having the time of their lives. After the performance, the students watched the Flying Circus Big Band and got to see where their music playing could take them in only a few short years.

Overall, the St. Louis trip was a great opportunity for the CYJO to showcase their talent on a national level and learn from their peers. The students were certainly changed by the experience and we are looking forward to taking more students in the Youth Jazz program on similar trips in the future. Below, we would like to share some of the feedback we have received from a few of our students and chaperones who were able to join us on this incredible experience.

“Our recent trip to St. Louis and Cincinnati was a great close to very successful CYJO season. The band represented our program and our city with a strong set of music and high level of professionalism. Trips like this really make the Youth Jazz experience something special. I couldn’t be prouder of our outstanding soloists and graduating seniors. It’s been a real honor to watch our musicians grow as artists and young adults.” – Mark Donavan, CYJO Artistic Director

“Nothing compares to the opportunity to watch our young students blossom in such a short amount of time, sharing their musical personalities with musicians and audiences young and old in other cities. When you spend an entire school year with these students and cap that season off on such a positive note, you are left feeling energized and full of pride for what they accomplished and the ways we are able to bring about positive development in their lives. The future is bright with amazing students such as those from the CYJO, leading the way with creativity and community through the arts.  – Zach Compston, Director of Education and Community Outreach

“I had the privilege of serving as a chaperone, representing the Jazz Arts Group staff, on the CYJO’s trip to St. Louis.  Not only did the students rise to the occasion as they performed at the famed Bistro at Jazz St. Louis, but they bonded through a shared experience.  I thought the most touching part of the trip were the farewells. When the bus returned to the Lincoln Theatre late Monday night of the trip, there were hugs all around.  The students will never forget this experience because their friendships were strengthened by music. It was very moving to witness.” –Kim Goodman, Director of Donor Stewardship

“I am Eli Pace, the bass player of the CYJO, and I’d like to just take a minute of your time to express my gratitude for the amount of time and money you’ve put in the program. I am always looking for a place to play, and the CYJO never fails to give me those opportunities, especially something as big as playing in St. Louis. I’m deeply grateful to be meeting musicians with the similar drive and passion to be a great contributor to the jazz genre, as well as meet some of the real happenin players such as Antonio Hart. More importantly though, the trip brings the band closer together musically, and socially, better than any rehearsal or concert, and we have you to thank you for that.” –Eli Pace, Bass 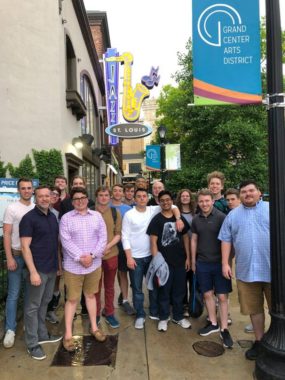 “I am a tenor player in the youth jazz orchestra and I was so fortunate to get to go on this trip. I really felt that the relationships with not only the music, but with the staff and students was significantly strengthened. The atmosphere in St. Louis was very inviting and the students were extremely welcoming. I would like to thank the supporters of this trip, I don’t know where we would be without you!” –Devin Coons, Saxophone

“This trip was honestly one of the best trips I’ve been on so far. It helped me bond with my other band members much more than any practice has. Especially as the only girl in the orchestra it really shortened the distance I felt between me and my fellow band members. This trip also helped me meet a lot of girls from many backgrounds in the jazz scene making me feel much more at home in the male dominated world of jazz. Thank you supporters for this wonderful experience that I will never forget.” –Nicole Roller, Trombone

“I am Ethan Glasgow, the guitar player for the CYJO, and I don’t think I would be the only one to say that this trip to St. Louis was a fantastic musical experience. Jazz is our music as Americans and the proud history of jazz is portrayed beautifully in the city of St Louis. Getting the privilege to also play with another youth jazz band as ours and alongside Antonio Hart was an incredible experience. Thank you to everyone who helped support this trip” –Ethan Glasgow, Guitar

“My name is Abhik Mazumder and I’m the pianist for the CYJO. The three-day excursion to St. Louis was exciting and memorable. I felt the city was the perfect place to be in as it possessed the vibrance of New York but also an inherent familiarity that comes in cities such as Columbus itself. Jazz is clearly deeply rooted in St. Louis’ culture and history, and the city seems to reflect the music’s colors and evocations. Despite the brilliant music scene, however, the best part of this trip was the camaraderie formed between all members of the band. From the all-day bus travels to the tired nights spent perpetually lying in our beds, I felt that we truly bonded and connected through our wonderful shared experiences. These memories will live with us forever and bring us together in a special way. Thank you to all the donors, supporters, and enthusiasts of music and music education at JAG for making these memories possible.” –Abhik Mazumder, Piano