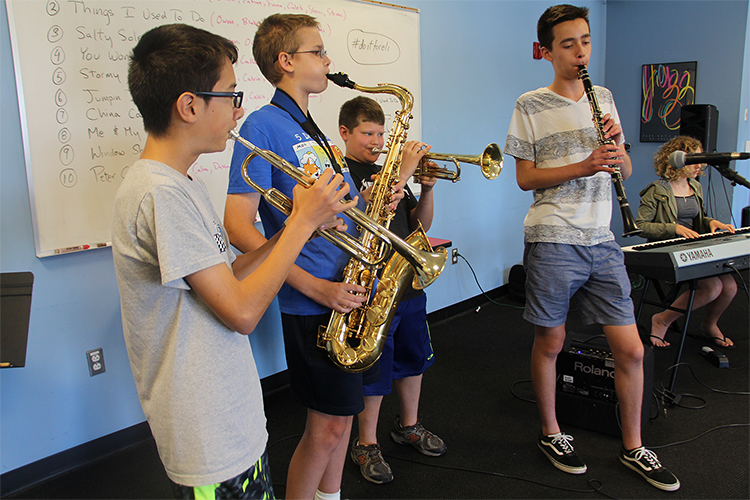 The past few weeks, Jazz Arts Group hosted three different summer camps: “Jazz Cats” Half-Day Camp, Camp Blues, and the Columbus Youth Jazz Summer Workshop. Dozens of students came through the Jazz Academy for three weeks of intense, fun-filled music-making. The energy I felt in the Academy can be described as vibrant and uplifting. It filled me with pride knowing that musical strides, no matter how big or small, were being accomplished in the Academy every day by both individuals and ensembles. It became clear to me that the Academy is central to the instruction, crafting and performance of jazz in Columbus. 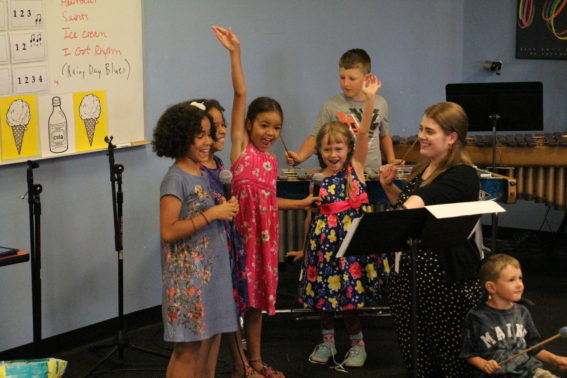 The first week, June 4-8th, we hosted the Jazz Cats camp. This camp was led by an educator known to some as Becky Ogden, but to most students as “Grandma Becky.” Grandma Becky is an inspiring music educator. She knows how to grab students’ attention, get them excited and invested in what they are learning, and having fun doing so. This environment led to quick friendships between students and teachers. There was smiling, talking, whispering, laughter and everything in-between. The kids were thrilled to be in the presence of not just Becky, but other jazz musicians, including Zach Compston, Derek DiCenzo, Danny Bauer, John Eshelman, Cory Robbins, Maggie Green and myself. Becky had a troupe of people surrounding her that followed her every lead, playing both leading and supporting roles throughout the week. With all of the musicians present, the students had the opportunity to play conga and bongo drums, drumset, auxiliary percussion, piano, xylophone, and sing. Personally, I loved teaching the young singers how to hold a microphone, learn lyrics and perform with confidence. As a class, they learned about jazz (“What is jazz?”), jazz and blues song forms, melodies of standards, famous jazz musicians, and drum rhythms for different styles of jazz. These are seemingly difficult tasks for young students, but they took them on with ease and enthusiasm! I was amazed at the abundant amount of energy they had about what they were learning. It made me happy to see such young students so excited about music.

The second week, June 11-15th, we hosted Camp Blues. This was the 10th anniversary of Camp Blues, which is led annually by the Sean Carney Band. Students involved in this camp were slightly older; most in middle and high school. Throughout the week. they learned about the literature of blues music, blues riffs and melodies, the music theory involved with blues (scales, keys, song forms) and most importantly, how to make music and jam with each other. I was immediately blown away by the talent in the room. On one tune, a student would play piano, then on another, perhaps harmonica. This was the case for many of the students; they were multi-instrumentalists. I again had the opportunity to work with the vocalists. I loved their style of singing. I noticed that they had strong natural instincts and technique. I worked with one of the vocalists on selling the song through acting and microphone technique. At the beginning, it was difficult to break the barrier of discomfort, but by the end of the week, she was incredible. You couldn’t take your eyes off of her! She was using the lyrics to convey a message, and she showed that through her facial expressions and her stage presence. I was so proud of her! 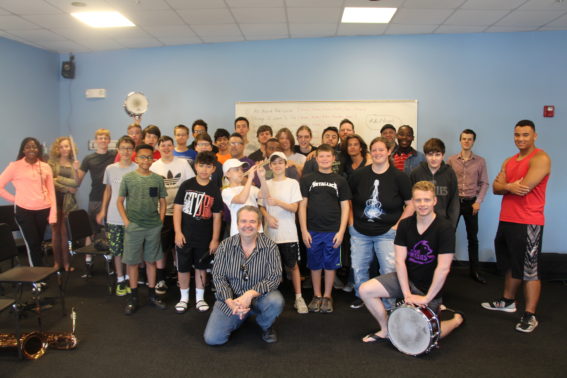 By the end of the week, the setlist had been reeled in and the camp was focused on running the show. This happened in the large room of the Jazz Academy. Focusing on one objective gave the students some down time, as not every student was in every tune. When not onstage, students could be seen sharing lunches, conversing, laughing, and most importantly: jamming. No matter what room I went in, there was consistent music-making. This time allowed the students to learn about each other, form friendships and share their passion for music together.

The most exciting moments of this camp were the performances and recording session. Camp Blues students had the opportunity to perform twice, and record an entire album! Their first performance was at Rush Creek Burgers and Brews, and served as a final dress rehearsal in front of parents and customers. The second performance was at the Gahanna Creekside Blues and Jazz Festival. The students created an exciting and fun environment on both stages. You couldn’t help but notice how much fun the students were having onstage together. They were dancing, smiling and having fun jamming together. The students didn’t seem nervous at all! There was a vibe of teamwork to this group, and they all trusted each other enough to have fun and enjoy the performance. Although it was extremely hot at the Creekside Festival (gotta love summer in Ohio), the kids had a blast performing for a large crowd of festival-goers. What was really unique to this camp was that the students recorded an album of their tunes in our very own Jazz Academy. Almost all the tunes were recorded in single takes! The kids had fun and enjoyed an experience that some musicians don’t get until adulthood, if at all.

The final week of Jazz Academy summer camps, June 18-22nd, was the Columbus Youth Jazz Summer Workshop. This camp brought some of the best professional jazz musicians together with some of the best upcoming jazz students for a week of learning, exploration and performance. The students worked closely with Mark Donavan, Zach Compston, Mitchell Parton, Elaine Mylius, and Derek DiCenzo. Students were also given the opportunity to learn from Columbus Jazz Orchestra members Bob Breithaupt, Wes Orr, Pete Mills and Linda Landis in masterclasses during the program. 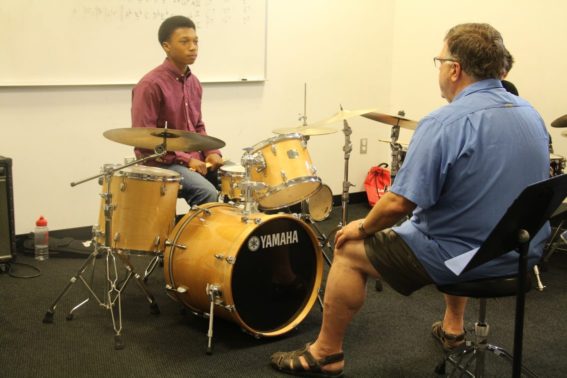 All of the students combined to make a “super big band,” and split up to make four combos. This gave the students experience in the differing ensemble settings that exist in jazz. In the big band setting, the students had the opportunity to play a variety of big band literature under the direction of Mr. Mark Donavan. With so many players per instrument, they learned how to create unified sound within their sections. This requires students to play their parts with crispness and intensity, which can be challenging! The small group setting posed other challenges. The students functioned more as soloists, which requires the same crispness and intensity as when playing in a big band, but perhaps more confidence in your role as a soloist. Additionally, they had the opportunity to play both leading and supporting roles when trading improvisational solos and comping for each other. At the end of the week, the students recorded an album of all the combo tunes they learned, and then went to State Auto Insurance for a final performance. The performance was moved inside (thanks, Ohio weather!) but despite this, the kids had fun and played really well. To open the show, all the students played 6 big band selections. Then, they split up into their combos and chose a few tunes to play from each of their combo’s repertoire. I was so impressed by the diverse range of jazz styles these students mastered in just 5 days. Employees, patrons and parents alike were amazed by the talent these young musicians displayed.

No matter what camp was going on, the talent, artistry and passion I witnessed in the Jazz Academy the last three weeks has inspired me as an artist, student and future educator. The Jazz Academy truly is the home of jazz in Columbus.