Whether you’re a high school student looking for a high-level community music program or a middle school student looking to develop your musical voice, the Columbus Youth Jazz program at the Jazz Academy is the place to be! Each ensemble rehearses weekly and offers a variety of performances, guest artist workshops, free CJO tickets, recording sessions, and more during the season.

Students in grades 7-12 are open to audition for the CYJ program.

The CYJ program has expanded to include the CYJ Vocal Lab, which meets on Sundays alongside the instrumental ensembles. Participants learn the ins and outs of singing jazz, including technique, style, improvisation and band-leading and have a final performance each semester where they get to sing with a live rhythm section. 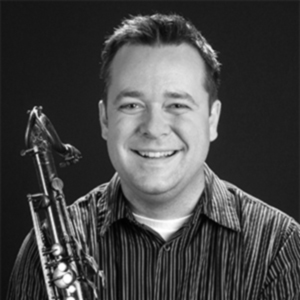 Mark Donavan’s broad classroom teaching background and extensive performance resume creates an environment that brings the best out of the young musicians he works with. He has launched two Central Ohio youth jazz bands: the Columbus Youth Jazz Workshop and the Columbus City Schools Jazz All-Stars.  Both groups have brought together students from a variety of backgrounds and have inspired young people to study music in college and to play professionally. Donavan performs in the central Ohio area as a saxophonist and pianist and has appeared on stage with many regional and national acts. His professional writing credits include the Columbus City School district’s music curriculum and a jazz survey course for online learning.  Donavan is currently the instrumental music director at Fort Hayes Arts and Academic High School. 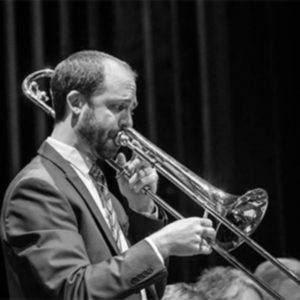 Ryan is the director of the Columbus Youth Jazz Studio. He also teaches jazz studies and jazz trombone at Capital University, low brass and jazz history at Denison University, and is on faculty for the Jazz Labs Dayton Camp. Previous teaching positions include at Kenyon College, Otterbein University, Mount Vernon Nazarene University, and as jazz faculty at Music For All’s Summer Symposium.

As a performer Ryan is a former member of the Glenn Miller Orchestra and is currently a member and soloist with the Columbus Jazz Orchestra. He can be heard as a soloist on their latest recording, Come Together. He is also co-leader of Such Sweet Thunder, an octet focusing on the music of Duke Ellington & Billy Strayhorn. He is also a member of the Cathedral Brass Ensemble, Vaughn Wiester’s Famous Jazz Orchestra, Yumbambe. In addition, he performs in the pit orchestras of Broadway Columbus; has shared the stage with such performers as Frankie Valli, Bill Dobbins, Johnny Mathis, Spoon, the Temptations, Jiggs Whigham, and the O’Jays; and world tours with the Guy Lombardo Orchestra. You can hear him as a featured soloist on Andrew Hartman and Still Motion, in addition to recordings by the Glenn Miller Orchestra, Wet Darlings, New Basics Brass Band, Jesse Henry, and the Famous Jazz Orchestra. 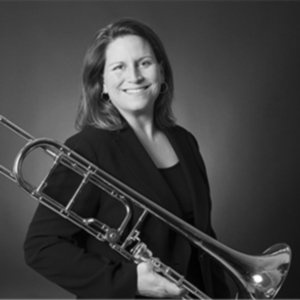 Jessica Sneeringer is a graduate of The Ohio State University earning Bachelor’s Degrees in Music Education and Trombone Performance as well as a Masters Degree in Music Education. Jessica is currently in her 15th year as the Director of Bands at Columbus Academy in Gahanna, Ohio, and is the Chair of the Performing Arts Department.  A member of the Central Ohio Brass Band since 1999, she was a soloist and principle trombone until 2005, when she stepped onto the podium.  Over her 16 years as COBB’s conductor the group has enjoyed much growth, success, and critical acclaim, having won the 1st Section of the North American Brass Band Association a record 5 times.  In July of 2019, COBB performed at the Interational Trombone Festival with acclaimed recording artist Brett Baker.

Also a freelance trombonist Jessica has the privilege of playing with many fine groups including The Athena Brass Band (which she is fortunate to have the opportunity to now conduct), the Central Ohio Symphony Orchestra, and a variety of jazz bands in and around Central Ohio. Over the years, Ms. Sneeringer has performed with the Disney Collegiate All-Star Band, Monarch Brass, Phil Smith, Allen Vizzutti, Nancy Wilson, Jiggs Whigham, Frank Foster, Jen Krupa, and Jennifer Wharton among many other artists. 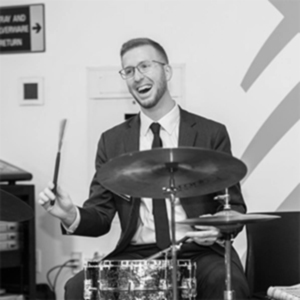 Zach Compston is a highly regarded drummer, percussionist and educator, known for his passion and experience in many avenues of the music world. He is the leader of the Zach Compston Big Band and performs regularly with tenor saxophonist Pete Mills, as well as the Latin jazz ensemble Waves de Ache. His performance credits include Andrea Bocelli, Columbus Jazz Orchestra, Bobby Floyd, Greta Matassa, Columbus Symphony Orchestra, ProMusica Chamber Orchestra, Lafayette Symphony and Owensboro Symphony.

As an educator, Zach is well versed in many teaching settings. As an Associate Instructor at Indiana University while pursuing his Master’s Degree, he taught the percussion techniques course, gave private lessons, and conducted the percussion ensemble. He has given clinics at Wichita State University, Beavercreek Jazz Festival, Jazz Education Network Conference and the Ohio Music Education Association Conference.  A yearly instructor at the Fairbanks Summer Arts Festival in Alaska, Zach has developed a keen ability to communicate and connect with people of all ages and ability levels.

Zach is currently Director of Education and Community Engagement at the Jazz Arts Group of Columbus, America’s oldest non-profit organization dedicated to advancing the art of jazz through performance and education. He develops and implements in-school programs as well as community engagement opportunities for all ages. 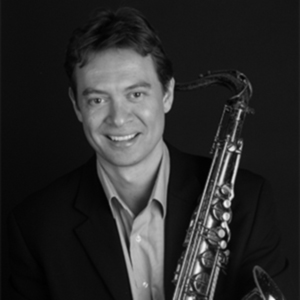 After graduating in 1995 from the University of Cincinnati College-Conservatory of Music with a Bachelors in Jazz Performance, Bryan cut his teeth in the industry as a soloist and guest artist with performers around the world on the Princess and Royal Caribbean Cruise lines. He then relocated to London, England for three years. He started teaching and also began performing and recording in salsa, jazz and function bands hired out for weddings and other special events. Bryan formed his own band playing original music at many of the popular jazz clubs in London, including The 606 Jazz Club, the Jazz Café and the Bulls Head Barnes. He has shared the stage with some of the most famous names in jazz such as Joe Henderson, Kenny Garrett, Wes “Warmdaddy” Anderson, Conrad Herwig, Jack McDuff, Slide Hampton and George Benson. He has also been a featured soloist for the Temptations, The Columbus Jazz Orchestra, Steve Winwood, Vaughn Weister’s Famous Jazz Orchestra, Afro-Rican Jazz Ensemble, Kico Cowan and Expresion Cubana, The Four Tops and The Spinners.

Bryan has lived in Columbus for the last 13 years. During this time he has dedicated himself to composing and perfecting his craft. In March 2005 he recorded his first CD under his own name showcasing five original compositions. The CD features Bobby Floyd on the B3 Organ, Derek Dicenzo on guitar and Reggie Jackson on drums and was named the best jazz CD of 2005 by “The Other Paper.”

Bryan especially enjoys his career as a teacher at a private music studio in Hilliard and through the “Choices” program. He occasionally works with other education programs through the Jazz Arts Group. Bryan has been teaching beginners through professionals for close to eight years. 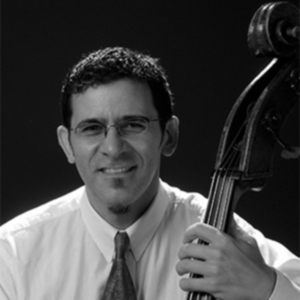 Derek DiCenzo is a multi-instrumentalist who is as comfortable playing jazz on the acoustic bass as on the guitar or even the steel drum. He has been a full-time musician based in Columbus, Ohio for many years; his diverse influences and uncanny musical intuition has made him a much sought-after player. He has been a performer and instructor for Jazz Arts Group’s education programming for many years. Derek inspires students with his love of music and is well-versed in teaching students of all ability levels. 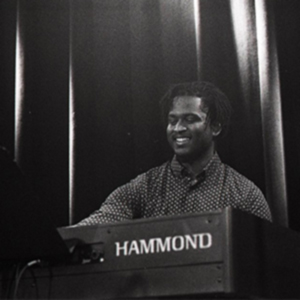 Robert Mason is a pianist and organist from Columbus, Ohio. He graduated from OSU with a BM in Jazz Studies and a minor in Music, Media and Enterprise. 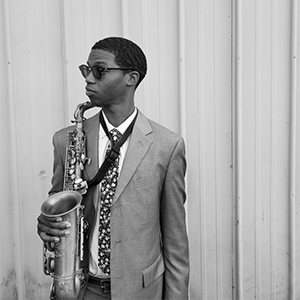 Hailing from Cleveland, Faheem Najieb is a professional saxophonist and educator
currently living in Columbus, OH. Faheem studied at Ohio State University and following
graduation in 2015 with degrees in Jazz Studies and Music Education, he accepted a teaching position in Columbus City Schools. Faheem enjoys a balanced and busy career of performing and educating at Mifflin Middle School, private lesson studios, Jazz Arts Group as well as bands around the greater Ohio area. 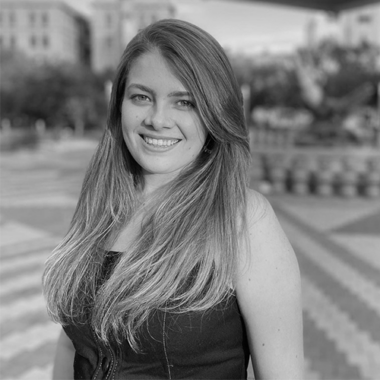 Recognized  “one of the most promising young jazz vocalists of her generation,” Rachel Azbell seeks to put her own stamp on the standards while paying homage to the inspiring women that have come before her. Her classic, sultry tone is particularly inspired by jazz greats Ella Fitzgerald and Nancy Wilson. Initially a classically trained pianist, she is now a professional vocalist and a leader in vocal jazz education, striving to create opportunities and a sense of community for young vocalists.

In partnership with Jazz Arts Group, Rachel piloted the Columbus Youth Jazz Vocal Lab, a tuition-free program for middle and high school vocalists to explore their solo jazz voice and expanded upon this curriculum to include a week-long summer camp, the Jazz Academy Vocal Workshop. As a private vocal instructor, she has extensive experience teaching both contemporary and classical styles to middle, high school and college-aged students.

Rachel recently graduated with a master’s of music in jazz studies from the esteemed University of North Texas, under the direction of Jennifer Barnes and Rosana Eckert. There, she served as a teaching fellow for the vocal jazz area where she directed West End and Third Street vocal jazz ensembles, taught private lessons, and instructed a vocal jazz studies course for non-majors. To learn more about Rachel’s upcoming performances, listen to her music or learn more about voice lessons, please visit her website at rachelazbell.com.