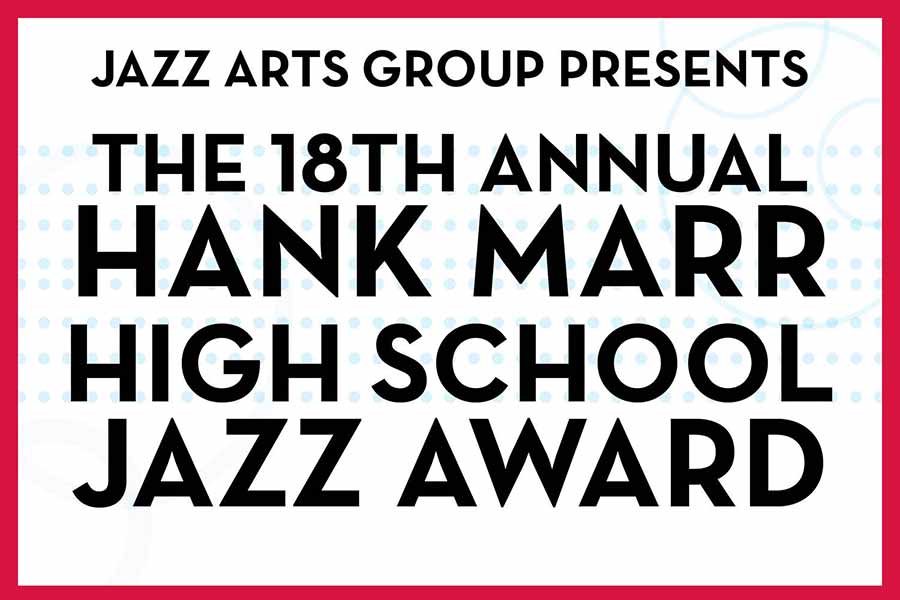 Columbus, OH –The Jazz Arts Group of Columbus (JAG) has announced its winner of the 2020 Hank Marr High School Jazz Award – 17 year-old drummer Simon Metzger.  The award demonstrates excellence in musicianship and performance amongst young students of jazz in Ohio and comes with a cash prize of $500 along with an opportunity to perform with the Columbus Jazz Orchestra, led by Byron Stripling.

Each year, Jazz Arts Group hosts the Hank Marr High School Jazz Award to showcase Ohio’s top young jazz musicians and honor the late pianist and B3 organist Hank Marr.  Beginning each year in the spring, high schoolers across the state prepare their audition recordings and send them in for three finalists to be chosen.  These finalists gather at the Jazz Academy in the Lincoln Theatre in downtown Columbus to play for some of the greatest professional jazz musicians in the state.  After individual and group performances among the three finalists, one excellent musician is chosen as that year’s Hank Marr High School Jazz Award Winner.  The winner sees their name etched into the plaque alongside each triumphant awardee since 2003.  They earn a $500 cash prize and a stack of Jamey Aebersold play along books for both them and their school.  Most exciting, the winner joins the Columbus Jazz Orchestra on stage for a once in a lifetime experience to play with the band at its annual JazZoo concert series!

Due to the impact of COVID-19, the finals could not be conducted in-person.  As a result, each online submission was judged in a single round in order to comply with statewide Stay-At-Home orders.  After reviewing the submissions, the judges confidently chose the 2020 winner.  Simon Metzger will be performing with the Columbus Jazz Orchestra at a later date, due to the cancellation of the 2020 season of JazZoo.

In addition to the Hank Marr High School Jazz Award, Jazz Arts Group expanded the program to include the “Greasy Spoon” Blues Showcase.  This showcase provides an opportunity for both middle and high school students to win a $25 gift card to www.jazzbooks.com by submitting a recording of themselves performing the blues.

Columbus music legend Hank Marr was one of the world’s masters of the Hammond B3 organ.  Along with Hank’s celebrity status as a member of the jazz elite, he was a dedicated and gifted educator.  In recognition of over fifty years as a performer, teacher, arranger and conductor, the Jazz Arts Group established the Hank Marr High School Jazz Award as a tribute to this special individual.  His willingness to “pass it on” makes the encouragement of young jazz artists an important and meaningful activity.  Support for the Hank Marr High School Jazz Award comes from Crabbe, Brown, and James, Jamey Aebersold Jazz, Stanton’s Sheet Music, and Jazz Education Connection of Ohio.  Additional support comes from individual contributors who knew and loved Hank Marr.

Due to Covid concerns this year, we conducted the contest virtually with digital submissions of the contest materials.  The adjudicators for the competition were Jim Rupp, drummer, lecturer, Professor of Music at the Ohio State University; Ben Huntoon, trumpet, jazz coordinator at Stanton’s Sheet Music; Tom Carroll, guitarist, retired Professor of Music at Denison University.

Simon Metzger, 17, is finishing his junior year at Bowling Green High School in Bowling Green, Ohio.  He participates in the BGHS Marching Band, Symphonic Band, and Jazz Cats.  Simon began playing the drums at age 4 when he began his studies with students of the late Dr.Roger Schupp and briefly with Dr.Schupp himself.  He currently studies with Dr. Dan Piccolo at Bowling Green State University, where he also participates in jazz ensembles directed by Jeff Halsey and David Bixler.  During Simon’s first three years of high school, he has twice been selected to the OMEA All-State Band, BGSU High School Honors Band, Northwest Regional Orchestra, and to the OMEA District 1 Honors Band three times.  In 2019, he was selected as a member of the NAfME All-National Concert Band.  In 2020, he performed with the OMEA All-State Jazz Band under the direction of Bill Warfield.  He has received the Woody Herman Jazz Award.  Simon intends to pursue music as a career and is currently looking at several Jazz Studies programs.

New for 2020 was the addition of the Greasy Spoon Blues Showcase, a tribute to Hank Marr’s 1964 hit single, “The Greasy Spoon”.  The blues is a fundamental component of jazz, and a great source of learning for aspiring students.  In the month of April, we used the soulful blues sound of Hank Marr to teach students to perform the blues.  Students in grades 7-12 were encouraged to submit a recording of themselves performing the blues for a chance to win one of five $25 gift certificates to www.jazzbooks.com, generously provided by Jamey Aebersold himself.