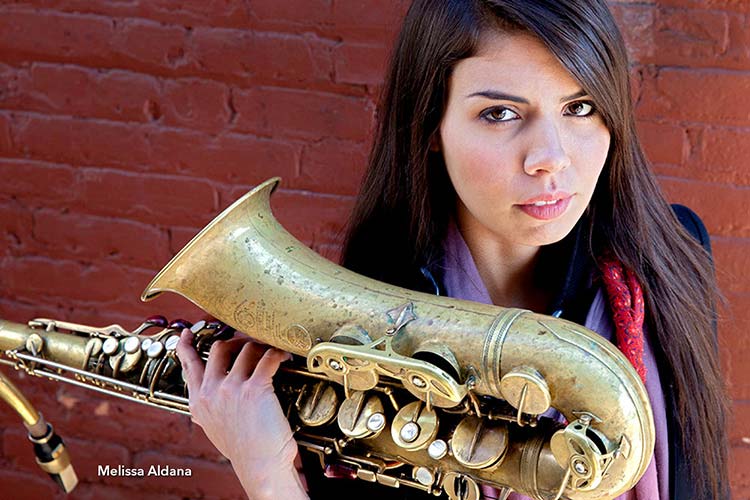 In 2013, Chilean-born saxophonist Melissa Aldana made history and shattered jazz’s glass ceiling when she became the first female instrumentalist and the first South American ever to win the prestigious Thelonious Monk Jazz Competition. She is also a recipient of the Martin E. Segal Award from Jazz at Lincoln Center and a double recipient of the Altazor Award, Chile’s prestigious national arts prize.

Born in Santiago, Aldana began playing saxophone at age six under the tutelage of her saxophonist father, Marcos Aldana. Her first saxophone, an alto, had belonged to her grandfather. Early influences were Charlie Parker, Cannonball Adderley and Michael Brecker. But after hearing the music of the great tenor saxophonist Sonny Rollins, Aldana switched to tenor sax.

In her early teens, Melissa began performing in jazz clubs in her native Chile where a chance meeting with pianist Danilo Perez led to an invitation to perform at the Panama Jazz Festival and led to a number of auditions at music schools in the U.S. Aldana would ultimately attend and graduate from the Berklee College of Music in Boston. Since relocating to New York City, Melissa has made several critically acclaimed recordings and now tours extensively as a headliner at jazz clubs and music festivals internationally.

Howard Reich of the Chicago Tribune recently reviewed an Aldana performance and wrote, “Aldana stands as an irrepressibly creative phrase-maker, sidestepping cliché at almost every turn. It takes a certain amount of intellectual engagement to appreciate how much content and musical substance Aldana pours into every solo. The closer you listen, the deeper the reward.” And Jazz Times Magazine stated boldly: “Melissa Aldana is going to be an influential tenor saxophonist in jazz for decades to come.”