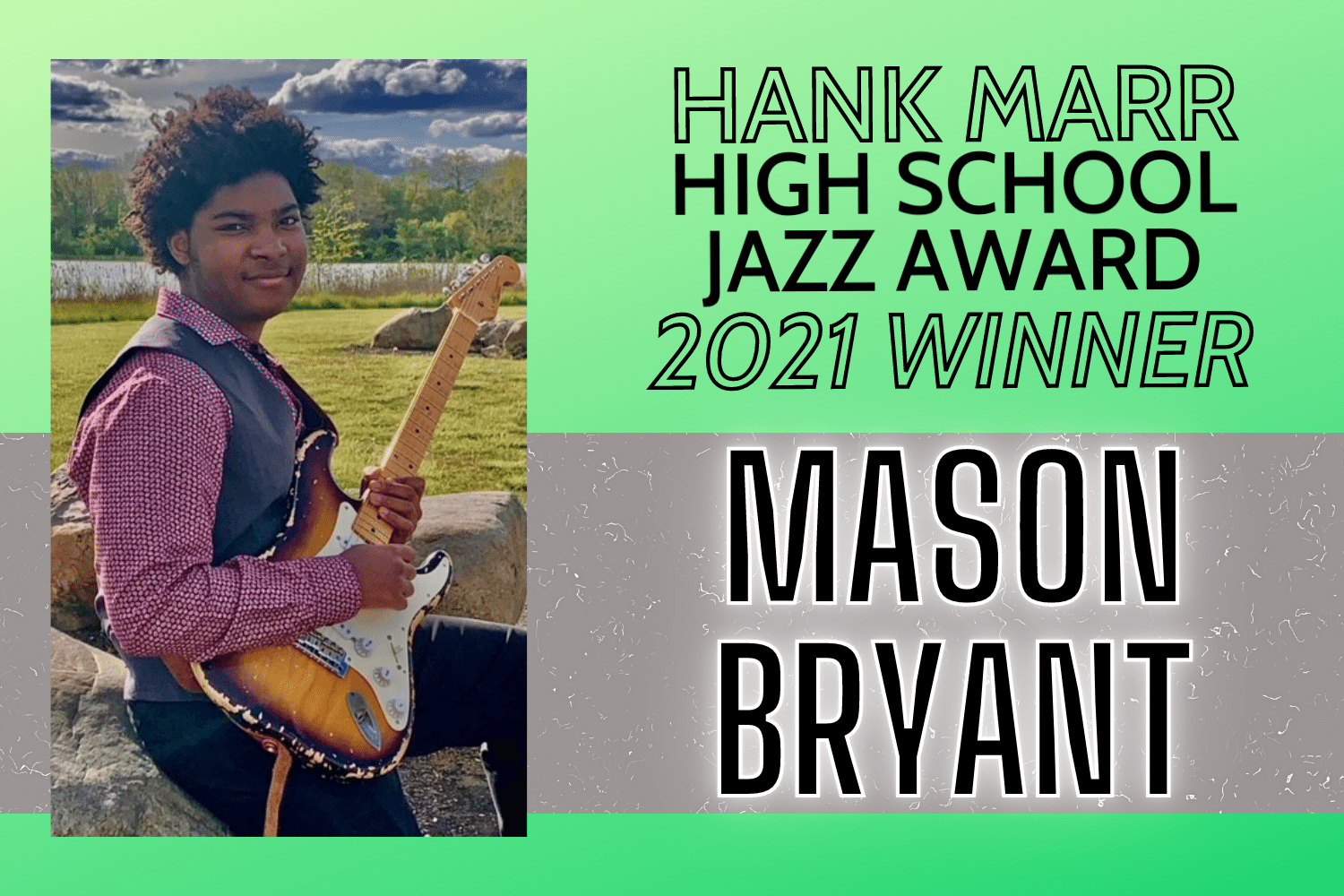 Columbus, OH –The Jazz Arts Group of Columbus (JAG) has announced its winner of the 2021 Hank Marr High School Jazz Award – 16-year-old guitarist Mason Bryant. The award demonstrates excellence in musicianship and performance amongst young students of jazz in Ohio and comes with a cash prize of $500 along with an opportunity to perform with the Columbus Jazz Orchestra, led by Byron Stripling.

Each year, Jazz Arts Group hosts the Hank Marr High School Jazz Award to showcase Ohio’s top young jazz musicians and honor the late pianist and B3 organist Hank Marr. Beginning each year in the spring, high schoolers across the state prepare their audition recordings and send them in for three finalists to be chosen. These finalists gather at the Jazz Academy in the Lincoln Theatre in downtown Columbus to perform before a panel of professional musicians and educators. After individual and group performances among the three finalists, one excellent musician is chosen as that year’s Hank Marr High School Jazz Award Winner. The winner sees their name etched into the plaque alongside each triumphant awardee since 2003. They earn a $500 cash prize and a stack of Jamey Aebersold play-along books for both them and their school. Most exciting, the winner joins the Columbus Jazz Orchestra on stage for a once in a lifetime experience to play with the band in its annual summer concert series!

Mason will be performing with the Columbus Jazz Orchestra on July 30th, during their summer concert series at the historic Lincoln Theatre.

Due to cancellation of the 2020 summer concert series, last year’s winner, drummer Simon Metzger will be joining the CJO performance this summer as well.

Columbus music legend Hank Marr was one of the world’s masters of the Hammond B3 organ. Along with Hank’s celebrity status as a member of the jazz elite, he was a dedicated and gifted educator. In recognition of over fifty years as a performer, teacher, arranger and conductor, the Jazz Arts Group established the Hank Marr High School Jazz Award as a tribute to this special individual. His willingness to “pass it on” makes the encouragement of young jazz artists an important and meaningful activity. Support for the Hank Marr High School Jazz Award comes from Crabbe, Brown, and James, Jamey Aebersold Jazz, Stanton’s Sheet Music, and Jazz Education Connection of Ohio. Additional support comes from individual contributors who knew and loved Hank Marr.

Mason Bryant is a 16-year-old sophomore who is currently attending Hilliard Bradley High School. Mason fell in love with music around the age of 9 when he first heard his stepfather play an acoustic guitar. To him, it was the best thing he had ever heard, and it made him want to learn guitar. A year or so later, Mason played guitar in his elementary school’s talent show. When he saw the looks on people’s faces as he launched into a solo, he knew that this was what he was meant to do. After this, Mason participated in a Columbus Youth Jazz Lab, and was introduced to his guitar instructor, Dennis Hodges. Mason also joined School of Rock which introduced him to kids who were as passionate about music as he was. While he was in School of Rock, Mason earned a place in their House Band and later became a School of Rock All-Star through an international audition process. As a School of Rock All-Star, Mason did a 9-day tour of the west coast in 2019, from Seattle to San Francisco. In 2020, Mason joined the Columbus Youth Jazz Orchestra, as jazz has become his musical passion. After graduating from high school, Mason is looking forward to playing music at the college level and eventually becoming a professional musician.

Two students received runner-up awards for their participation in this year’s competition: Alex Davenport, drummer, and Jesse Jefferis, piano. All three finalists have been active participants of our Youth Jazz programs for many years.

Simon Metzger, 17, is finishing his junior year at Bowling Green High School in Bowling Green, Ohio. He participates in the BGHS Marching Band, Symphonic Band, and Jazz Cats. Simon began playing the drums at age 4 when he began his studies with students of the late Dr. Roger Schupp and briefly with Dr. Schupp himself. He currently studies with Dr. Dan Piccolo at Bowling Green State University, where he also participates in jazz ensembles directed by Jeff Halsey and David Bixler. During Simon’s first three years of high school, he has twice been selected to the Ohio Music Education Association (OMEA) All-State Band, BGSU High School Honors Band, Northwest Regional Orchestra, and to the OMEA District 1 Honors Band three times. In 2019, he was selected as a member of the National Association for Music Education (NAfME) All-National Concert Band. In 2020, he performed with the OMEA All-State Jazz Band under the direction of Bill Warfield. He has received the Woody Herman Jazz Award. Simon will be attending the University of Southern California, majoring in Jazz Studies.