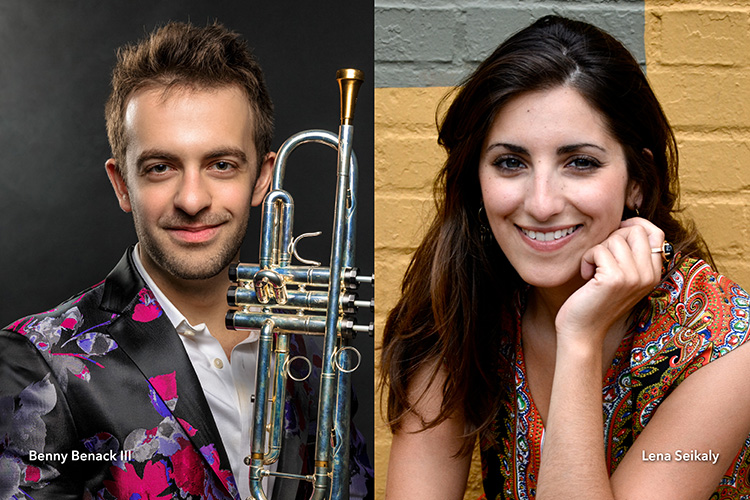 Trumpeter/vocalist Benny Benack III is equally at home performing jazz and pop, and equally at home as both singer and trumpet soloist. His singing style has been likened to the great crooners of yesteryear such as Bobby Darin and Mel Tormé, and he has enough dazzling trumpet chops to inspire the great trumpeter Wynton Marsalis to name him among the next generation of jazz greats. Benack is a frequent guest artist at international jazz festivals and has appeared as a soloist with Josh Groban and Ben Folds. His New York club appearances include the famed Birdland Jazz Club, where he recently performed with cabaret icon, Anne Hampton Callaway, and at Bemelman’s Bar in the fashionable Carlyle Hotel where he shares the stage and performances with fashion icon, Isaac Mizrahi.

Named “one of Washington’s preeminent jazz singers” and “brightest voices in jazz,” by the Washington Post, Lena Siekaly is making her mark in national and international jazz circles as a revivalist of traditional jazz vocals, as well as an innovator in contemporary vocal jazz styles. She was a semi-finalist at the prestigious 2015 Thelonious Monk Institute International Jazz Vocals Competition and is an alum of the Betty Carter Jazz Ahead program in DC. Audience response to her stunning debut with the Columbus Jazz Orchestra at JazZoo 2017 prompted an immediate invitation from CJO Artistic Director, Byron Stripling, to appear on the CJO’s 2018-2019 season at the Southern Theatre.