Swingin’ in the New Year 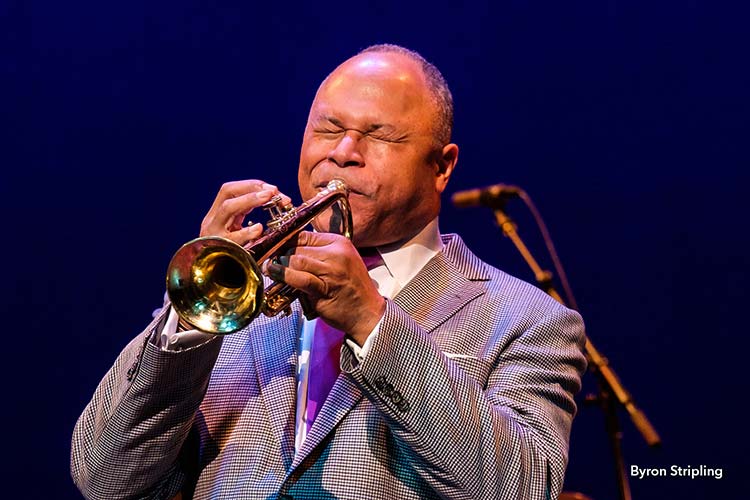 Columbus Jazz Orchestra Artistic Director Byron Stripling steps into the spotlight singing, swinging and playing trumpet with his quartet in Swingin’ in the New Year. An audience favorite, the concert sold out when it was presented in 2016 and 2017.

Classically trained at the Eastman School of Music, Byron Stripling got his start performing professionally with the great American jazz trumpeter, Clark Terry. He would go on to perform with several of the most esteemed big bands in America including Lionel Hampton’s band, the Woody Herman Orchestra and the Count Basie Orchestra.

Byron has also performed with the Lincoln Center Jazz Orchestra, the Carnegie Hall Jazz Band and the GRP All Star Big Band. He has appeared with over 50 different symphony and pops orchestras including the Boston Pops under the direction of Keith Lockhart and John Williams, the Pittsburgh Symphony, Detroit Symphony, Seattle Symphony, Baltimore Symphony, Minnesota Orchestra, National Symphony, St. Louis Symphony, Vancouver Symphony, Utah Symphony and the Toronto Symphony. In addition to his own recordings, Stripling has appeared as a guest artist with others and his trumpet can be heard on a number of film soundtracks and original Broadway cast recordings.

In 2002, Byron Stripling became the artistic director and conductor of the Columbus Jazz Orchestra where he as has presented such guest artists as Branford Marsalis, Chuck Mangione, Patti Austin, John Pizzarelli, Mavis Staples, Melba Moore, and Wycliffe Gordon. And yet, Byron remains the orchestra’s biggest draw. His performances are full of remarkable musicianship, wit, showmanship, and a joyous spirit.