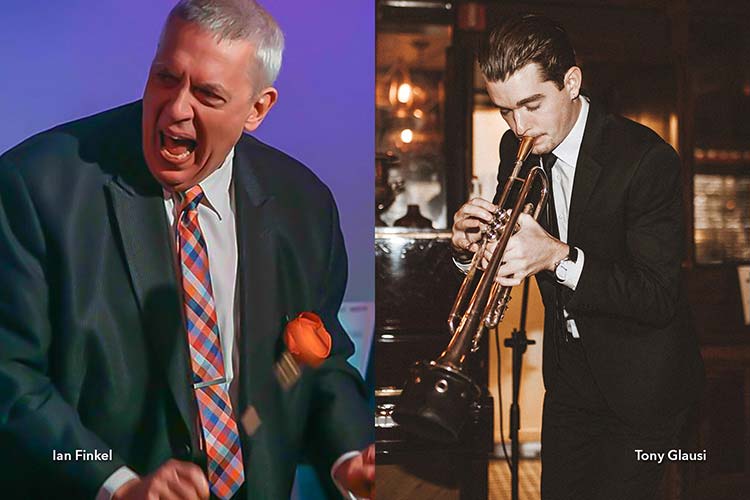 Due to the effects of COVID-19, this event has been postponed….read more

“Whisper! Speak easy. The police are watching!” warned one Pittsburgh newspaper when describing speakeasies, the illicit, hole-in-the-wall, unlicensed bars that sprang up in many of America’s big cities during prohibition. Bathtub gin flowed, flappers danced the Charleston, and the hot jazz of Duke Ellington and Bix Beiderbecke filled the air. The Columbus Jazz Orchestra recalls the roaring ‘20s and its impact on jazz and popular culture with a concert featuring 24-year old rising star trumpeter/composer Tony Glausi and veteran xylophone wizard Ian Finkel.

Tony Glausi has already established himself as an accomplished and award-winning trumpeter, keyboardist, composer and producer, crafting works for small and large jazz ensembles, pop and hip hop groups, and independent film and television projects. He has appeared on over 25 recordings including six of his own music. Glausi makes his Columbus Jazz Orchestra debut with Speakeasy Hot Jazz.

Ian Finkel has been called the world’s greatest xylophone virtuoso. He has appeared with and written for such stars as Michael Feinstein, Sid Caesar, Ginger Rogers, Tito Puente, Larry Gatlin, Martin Mull, and Madeline Kahn to name just a few. Finkel has also appeared Off-Broadway, on numerous television programs, collaborated with Philip Glass and has heard his works performed by numerous orchestras such as the American Symphony Orchestra and the Little Orchestra Society.

There’s a reason the 1920s were hailed “The Jazz Age.” An article in the August 1921 edition of The Ladies’ Home Journal posed the question, “Does Jazz Put the Sin in Syncopation?” The CJO intends to find out with Speakeasy Hot Jazz.