Jim Masters brings a depth of experience as a trombonist, singer, performer and educator. He toured the US and Japan with the Buddy Rich Band and the Widespread Jazz Orchestra. He has performed with the bands of Tito Puente, Mel Lewis, Clem DeRosa, Dave and Ralph Lalama, Roy Gerson, Lew Anderson, John Fedchock/Maria Schneider, and currently performs as a member of the Columbus Jazz Orchestra. 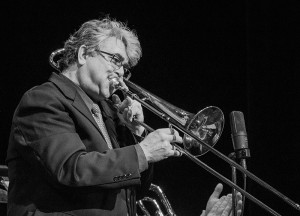 co-founder of Yumbambe. His quartet was featured for eight years at Spagio with Dave Powers, Jim Powell and Joe Ong. He also sings and plays regularly with pianist Joe Dunlap. He feels fortunate to have made music with many of the greats of jazz including Byron Stripling, Dizzy Gillespie, Clark Terry, Joe Lovano and Hank Marr.

He has been a featured vocalist and soloist at the Blue Note with Jorge Ander’s latin/jazz band, appeared in Bob Kindred and Anne Phillips’ Bending Towards the Light: A Jazz Nativity along with Dave Brubeck, Lionel Hampton, Jackie and Roy Kral, Harry “Sweets” Edison and many luminaries. He has performed for venues of all types, stages, orchestra pits, clubs and schools.

As a composer and songwriter he has over 100 compositions. His music regionally is found in the Worthington bicentennial play, The Scioto Company (“Let’s Take a Walk Around Worthington,” “Worthington, Oh Worthington”), and also is a composer and lyricist for “Back Where I Belong,” the official song of Licking County, Ohio. A family man, Jim writes many songs for and about children. His children’s choir piece, “We the Children,” was performed by the Columbus Girl’s Choir, Colonial Hills Choir in Worthington, and throughout Ohio. He is honored that his composition, “Here In St. Charles,” was recently voted the official song of his hometown of St. Charles, Illinois.

He served on the faculty of The Ohio State University as jazz trombone instructor and lecturer and two years as vocal jazz instructor at Capital University. Jim has appeared on the faculty of numerous music camps and festivals throughout the country, including the Stanford Jazz Workshop. He created The American Jazz Experience which is an Artist in Schools one-hour informance, which he and his quintet have presented to over 200,000 students in central Ohio.  Jim created and performed two youth concerts with the Jazz Knights at WestPoint Academy and currently conducts and presents for the Columbus Jazz Orchestra in their young people’s concert series All That Jazz.